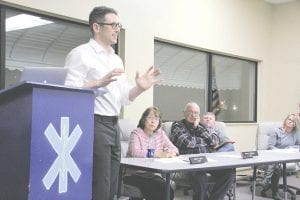 I realized I needed to educate Environmental Protection, myself.” Health Canada and the That didn’t set well with Ontario Ministry of the Lori McLane, who’s been Environment and Climate a vocal opponent of wind Change found no connection energy in northern Lapeer between wind turbines County. and health problems. She, along with Deb “Noise,” said Ellenbogen, Horen of Burlington “is a very personal thing.” Township and Michelle He noted that while one Peel are concerned about person may find the sound the possible health effects of a barking dog comforting, of wind turbines on special someone who was bitten by needs people. Peel told a dog as a child might not. board members that North He said Health Canada’s Branch Area Schools alone 2011 study looked at 1,200 has 300 special needs students. people selected randomly Michelle Peel of North Branch Township and Debbie Horen of Burlington Township question experts sent by DTE Energy on the possible health effects of wind turbines in a community. Photo by Phil Foley North Branch Township board members Alicia Provin, Robert Kilborn, Robert DeTavernier and Amy Snoblin listen to Dr. Jeffery Ellenbogen discuss the issue of health effects associated with wind turbines.

NORTH BRANCH TWP. — The North Branch Township Board and Planning Commission hosted a standing-room only meeting Wednesday evening for a discussion of wind turbines.
But after three hours those in favor and opposed to placing them in the township seemed to be where they started.
Newly-elected Township Supervisor Gary Swoish started the meeting reading a statement saying he had canceled his contract with DTE Energy to potentially place wind turbines on his farm.
He called for the informational meeting because, “I
She said her son has several seizure disorders and she’s concerned the flicker from turbine towers will trigger seizures in people like him.
Dr. Jeffery Ellenbogen, an assistant professor of neurology and a sleep medicine specialist at Johns Hopkins University, said studies by the Massachusetts Dept. of and found no connection between health problems and wind turbines.
Peel wanted to know if there had been any specific studies focused on special needs people. Ellenbogen said that while there were doubtless some special needs people in Health Canada’s study, no one has looked at that population specifically. 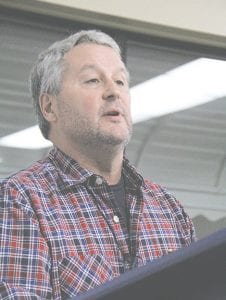 Noting that the highest sound levels recorded from a wind turbine has been 46 decibels, Ellenbogen said “I don’t think of noise as a health issue, but it is an important issue.”
Kenneth Kaliski, an engineer with Resource Systems Group that conducts noise studies, said there is a lot operators can do to mitigate turbine noise — including shutting them off at times. He said most of the sound created is from the interaction of the wind and the turbine’s blades.
He said most turbines produce less noise than the sound of the human voice.
While Norm Stephens, a former planning commission member from Almer Township in Tuscola County, urged North Branch-area residents to insist on tough rules for wind energy, Terry O’Conner, township supervisor in Huron County’s Minden Township said, “We’ve had no problems.” 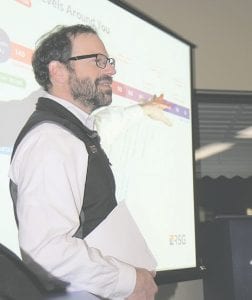 Kenneth Kaliski, an engineer, points to a chart detailing different sound sources during a meeting at the North Branch Township Hall Wednesday evening. Photos by Phil Foley
He said the 70 towers in his township have created a revenue stream that’s allowed to township to lower its millage rate.
“Green energy is our future,” O’Connor said.
John Simmons, who said his family began farming in North Branch in 1854, noted that when electricity first came to the area, some people opposed it. “If you come into my community,” he said, “you’d better be doing something good.”
McLane said she was not happy that only experts provided by DTE Energy were at the meeting. Swoish said if she could provide a list of experts opposed to wind energy he’d be happy to hold another informational meeting.
“We want to hear from the other side,” he said.
While the township’s planning commission is working on a wind turbine ordinance, there’s still no clear idea when it will present one to the township board.
“We can’t stop what’s happening,” said Planning Commissioner Mark Chapin. “I just hope we come up with something fair.”