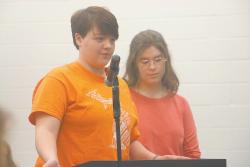 Lapeer High School students Aurorah Stephen and Bayley Lewis appeared before the Lapeer Community Schools Board of Education on Thursday to express a desire to participate in the nationwide walkout planned for March 14 in remembrance of the victims of the Parkland, Fla. shooting that occurred a month ago.
Photo by Nicholas Pugliese

Lapeer High School students Aurorah Stephen and Bayley Lewis appeared before the Lapeer Community Schools Board of Education on Thursday to express a desire to participate in the nationwide walkout planned for March 14 in remembrance of the victims of the Parkland, Fla. shooting that occurred a month ago. Photo by Nicholas Pugliese
LAPEER — The tragic shooting that took place at Marjory Stoneman Douglas High School in Parkland, Fla. occurred on Feb. 14, and exactly one month later, thousands of high school students across the United States will participate in a planned walkout in protest of gun violence and in remembrance of the victims of the shooting that claimed the lives of 14 students and three adults.

During the Lapeer Community Schools Board of Education meeting on Thursday, students representing the newly-formed club “Young Democrats” spoke during public time to express their interest in joining their peers nationwide next Wednesday. Lapeer High School student Aurorah Stephen spoke on behalf of the group, saying that “It is our wish to honor and pay tribute to the lives of the students and teachers who were lost on Valentine’s Day.”

The March 14 walkout has been dubbed the “National School Walkout” and in some cases is part of a greater youth movement for stricter gun laws led by survivors of the Parkland, Fla. shooting.

Stephen alluded to recent incidents closer to home that have brought the topic of student safety to the forefront. “Lapeer is no stranger to the fear, I, as a student, have questioned my safety,” she said. “We have been in the headlines and we are kept safe, but how close were we? What does the future hold?”

Stephen said that she’s “proud” that young people throughout the United States are asking these questions. “I want to be safe, I want my teachers to be safe, I want (the) school board to be safe. I want to explore all options to make us as safe as possible,” said Stephen. “This is an issue of public safety (and) I want Lapeer students to be a part of the solution.”

According to Lapeer Community Schools Director of Communications Jared Field, discussions have taken place between administrators in regards to a potential walkout. “We have consulted with our principals and Central Office Leadership Team regarding this topic, and we view our role as facilitative in nature,” he said. “We appreciate their desire to make their voices heard on this very difficult subject.”

During the board meeting on Thursday, LCS Superintendent Matt Wandrie also shared that discussions have taken place, and that the walkout has potential to be a “teachable moment.” Wandrie said he’s had discussions with students and the walkout is not intended to be disruptive of learning, “but to be a part of it.”

“I think the dialogue between adults and young people will help us take on this fight, if you will,” he continued. “I would like to be a leader in this regard, in partnership with the students.” Field added that the administration “(wants) to be supportive of our students and help facilitate a safe and constructive dialogue with the least amount of distraction.”

According to Stephen, she and fellow classmates are aware of concerns by administrators regarding safety, which is what led her to address the board.

“I want this event to be organized, scheduled and rather than be in conflict with our educational day, I think we could make it inclusive of our school day,” she said. Stephen said that student safety forums planned at Lapeer High School on March 13 would provide a perfect opportunity to explain the logistics of a walkout to participating students. “I think we have the opportunity to express the compassion, ambition and community spirit of Lapeer High School,” said Stephen.

Similar discussions have taken place in North Branch and Imlay City, and while definitive plans have not been made, administrations in both districts have expressed comparable opinions when it comes to the topic of a potential walkout. According to Mark Hiltunen, principal of North Branch High School, the goal is to keep a potential walkout as safe and as least disruptive as possible. “We want to support something that’s responsible and respectful, but not something that could become chaotic,” he said.

Hiltunen has met with his school’s student council and while conversations regarding the subject have been had, more discussions are needed in the week to come.

North Branch Superintendent Jim Fish said that he and other North Branch administrators have been doing research on the topic of walkouts, watching a webinar on Wednesday hosted jointly by the Michigan Association of School Administrators and schoolfocused, Michigan-based Thrun Law Firm that explained the legal and practical ramifications for how district leaders can handle potential student demonstrations.

“It’s not as simple as just having a walkout,” said Fish. “We want to keep it nonpolitical, (and a walkout) will be supervised by administration and teachers, but our students would be organizing this event if it does happen.”

Imlay City Superintendent Stu Cameron said that his district officials have been proactive to gauge their students’ interest in participating in the walkout. “Our administration actually went to student leaders and said that if there’s interest, we want to make sure it’s safe, and to partner with the students,” he said. “This is an issue that near and dear to them, it’s life and death for them and for us too, and it’s very important.”

According to Cameron, some students have expressed interest, but to date nothing organized has developed. “A walkout is a great statement, but it’s just a statement to those who view it or how it’s publicized,” he said. “We talked to students about having an area where students could make prepared remarks memorialized victims.”

Cameron echoed his counterparts’ view that the walkout and the social impact surrounding the national event is a valuable teaching opportunity. “Part of our function as a school is to help grow these kids in a democracy,” he said. “We’re really looking at it as a learning experience.”

Students in the school districts of Almont, Dryden and LakeVille may also participate in the March 14 walkout, but The County Press was unable to confirm those plans as of press time.