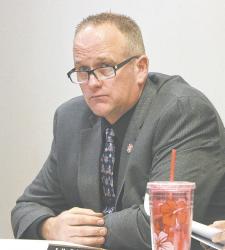 Start-up costs for the Mayfield Township Fire Dept. are now pegged at $3.5 million – a figure that could be passed on to residents via an assessment equal to “approximately one pizza dinner or several Starbucks drinks per month.”

That’s according to a “worksheet” and “inventory list” created by Mayfield Township Fire Dept. Acting Chief Tom Mitchell, and distributed by him to township board members on Feb. 12.

Because it was not given to anyone in the audience – nor any details discussed during the public meeting – The County Press requested the document through Michigan’s Freedom of Information Act.

The County Press also requested informational packets passed out by Township Supervisor Dianna Ireland about starting a fire department. Like Mitchell’s handout, no details were provided to the public at the meeting, nor any copies distributed.

• A print out of Michigan’s Police and Fire Protection Act 33 of 1951 that, among other things, parcels, and $550 assessed to vacant industrial sites.

In a footnote, Mitchell says “after 10 years assessment amounts will decrease to only fund regular operating budget.”

Mitchell includes another brief statement at the bottom of the worksheet.

“The average cost for a residential parcel with a home located on it equates to: approximately one pizza dinner or several Starbucks drinks per month!!!”

In another document entitled “Mayfield Fire & Rescue Start-Up Inventory”, Mitchell outlines some of items (and costs) associated with starting the department.

Mitchell – who now has a seat at the board of trustees’ table – told the board he has “been working on some inventory lists” that he compiled by looking at “an actual catalog.”

“It’s a hypothesis…it’s a best guess...it’s what I’ve thought of all through the years in walking through other fire stations and looking at various things,” Mitchell said.

The “inventory list” calls for $1.5 million to be used for “fire station cost.” The document provides no details about how Mitchell came up with the figure.

Another line item, for “apparatus”, carries a $1 million estimate. Apparatus identified are: pumper; pumper – tanker (can be used as backup pumper), tanker (solely for water supply), rescue/ squad/quick attack, and brush grass fire truck. No details are provided about what each unit would cost, if they would be used/new, or any other information.

Other miscellaneous costs make up the remainder of the estimated start-up costs, such as $2,000 for computer and furniture in the “chiefs’ room” and $7,750 for “kitchen.” The total estimated start-up cost is just over $2.8 million. However, Mitchell pits a “rounded” number at $3.5 million. There is no explanation given for why Mitchell “rounded” the figure up another $700,000.

Ireland – who did not return a message to The County Press by press time – said during the Feb. 12 meeting that it was “sort of a start-up budget, sort of.”

“That is…basically, yes…from the station up to the gear and all the guys to that point,” Mitchell said.

At its Feb. 12 meeting, the board appointed a deputy fire chief and created an advisory committee for the newly formed fire department.

Currently, Mayfield Township is serviced by Lapeer Fire & Rescue per a four-year deal that went into effect Oct. 1, 2017. The first year of the deal is costing Mayfield Township $185,000 with 2 percent annual increases.